Skip to content
Home » DDC Blog » Liane I. Brown » “Refuge” is a gift of survival

In a Florida news article in 1987, Nancy Miller wrote that Refuge “is a gift of survival.” Today Liane Brown‘s story continues to encourage readers to know there’s a Lord in whom they can trust and who will help them if they put their faith and trust in Him. The following is a reprint of Nancy Miller’s article.

Liane Brown believes in miracles. She says she lived through one, when her family survived the Nazi regime in Germany in World War II, then Russian Communist rule. And as a surprise birthday gift Oct. 1 for her 83-year-old mother, Emmy Guddat of Boca Raton, Brown gave her the just-published book she wrote about the experience.

“It was to tell how the Lord took care of one family whose mother fully trusted in Him,” Brown said. “It’s a tribute to my mother’s faith and courage.”

Before the war, Brown’s parents were successful leather merchants. Her father, Emil, 82, refused to join the Nazi party, so the Guddats, who are Christians, were persecuted and forced to close their store. Later came persecution by the Russians.

Brown’s 199-page soft cover book, Refuge, tells how Emmy Guddat kept Brown and her younger sister and two brothers alive in East Germany for 16 months during 1945-46, after the Russians invaded the country. For most of this time, Emil Guddat’s whereabouts were unknown.

“People have always asked me why we don’t have a book telling my family’s story,” said Brown, who lives in Stuart. “I’ve spoken at schools, churches and universities, and there was always the same question, ‘Why don’t you write a book?'”

… Brown describes how the Guddats fled their hometown of Insterburg, got within 50 miles of Berlin, but were unable to escape invading Russian troops, so lived with friends in Lippehne. At one point, forced to leave the house for three months, they hid in a farmhouse, which they called “the Ark.”

“The story is basically a story of miracles which the Lord performed in keeping the family alive,” Brown said.

At the time, Brown was 11, her brother Dieter, 7, her sister Marlies, 4, and her brother Udo, 1. To get food, Brown and Dieter begged for food from Russian troops and searched for anything edible on abandoned farms. Women didn’t dare leave their homes because of the danger of being raped, Brown explained.

After a year, Emmy Guddat decided to go to Berlin to secretly cross the border and find what had happened to her husband, Emil. She learned he was a prisoner of war in Africa.

On Jan. 16, 1946, the day she returned, Brown and Dieter ran to the railroad station to warn her that anyone returning from Berlin would be jailed. The minute they saw her, two soldiers took her away, and for nearly a week, Brown and Dieter went daily to cry for her release from a dark, windowless prison.

“Through miracles of the Lord, she was asked to work in the kitchen where it was warmer and there was some food. A short time later she was released,” Brown said.

From then on, Emmy Guddat had one goal: to earn enough money for tickets to Berlin. An accomplished seamstress, she did this by sewing for the Russians, then Poles sent in to resettle the land.

Several months later, the Guddats fled to a refugee camp in Nienburg, West Germany, where, having traced them through the Red Cross, Emil joined them on July 28, 1947. Here, the book stops.

The book was a surprise for both Emmy and Emil Guddat at a birthday party for Emmy, hosted by Brown and her husband, Luther, in Stuart. The Guddats have eight grandchildren and four great-grandchildren.

“It’s a highlight of my life,” said Brown, a first-time author. “The book will be an encouragments to people who read it, especially families in difficulty. They can know there’s a Lord in whom they can trust and who will help them if they put their faith and trust in Him.”

In 1956, Brown joined her aunt on Long Island, N.Y., to study English for a year. Instead of returning to Germany, as planned, she met and married her husband, and in 1958, her parents came to Long Island, too. Before retiring and moving to Boca Raton in 1972, Emil was in charge of shipping for a German import-export business and Emmy owned a cashmere sweater decorating shop.

Please be reminded that the above article was published in 1987 just after Refuge was first published. I have been combing through the family archives and unearthed this treasure. The sequel of Refuge was later completed under the title From Fear to Freedom. Now both books can be purchased in a special 2-books-in-1 format through your favorite book retailers including Amazon and Redemption Press. 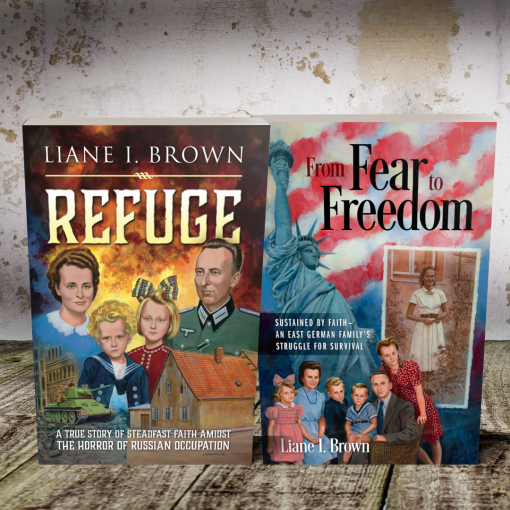 Refuge and From Fear to Freedom by Liane Brown recount the life of their German family trusting God in wartime while under Russian occupation.